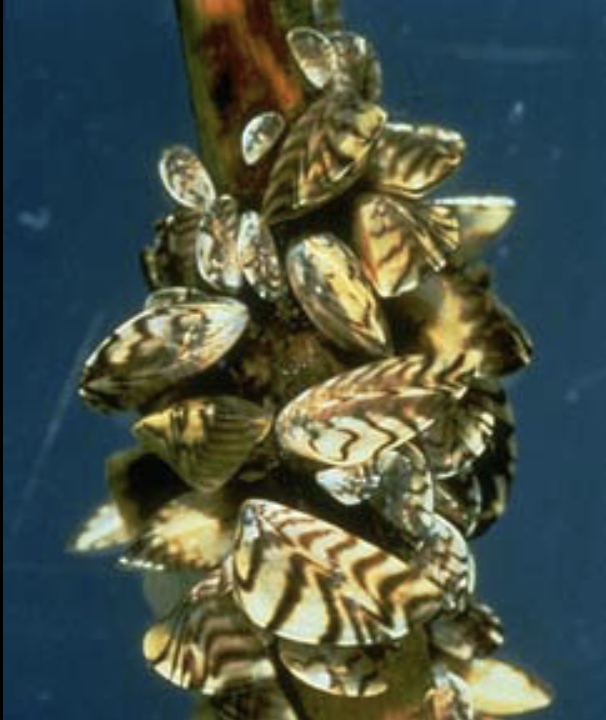 The zebra mussel is a tiny (1/8-inch to 2-inch) bottom-dwelling clam native to Europe and Asia. Zebra mussels were introduced into the Great Lakes in 1985 or 1986, and have been spreading throughout them since that time. They were most likely brought to North America as larvae in ballast water of ships that traveled from fresh-water Eurasian ports to the Great Lakes. Zebra mussels look like small clams with a yellowish or brownish D-shaped shell, usually with alternating dark- and light-colored stripes. They can be up to two inches long, but most are under an inch. Zebra mussels usually grow in clusters containing numerous individuals.

Zebra mussels feed by drawing water into their bodies and filtering out most of the suspended microscopic plants, animals, and debris for food. This process can lead to increased water clarity and a depleted food supply for fish and other aquatic organisms. The higher light penetration fosters growth of rooted aquatic plants which, although creating more habitat for small fish, may inhibit the larger, predatory fish from finding their food. This thicker plant growth can also interfere with boaters, anglers, and swimmers. Zebra mussel infestations may also promote the growth of blue-green algae, since zebra mussels avoid consuming this type of algae but not others

Once zebra mussels are established in a water body, very little can be done to control them. It is therefore crucial to take all possible measures to prevent their introduction in the first place. Be sure to follow the Clean Boats, Clean Waters procedure in preventing the spread of aquatic hitchhikers. DNR decontamination training video  In addition to these measures, boaters can take specific precautions in protecting their motors from zebra mussels including sanitizing with a mild bleach solution and taking advantage of Lake Owen’s hot water, high pressure station when it is available.

No selective method has been developed that succeeds in controlling zebra mussels in the wild without also harming other aquatic organisms. To a certain extent, ducks and fish will eat small zebra mussels, but not to the point of effectively controlling their populations. As of yet, no practical and effective controls are known, again emphasizing the need for research and prevention.